Franklin County Public Health licenses and inspects all public swimming pools and spas in our jurisdiction. Public swimming pools and spas include those owned and operated by cities/villages/townships, apartments, condominiums, hotels/motels, private swim clubs, country clubs, community or homeowner associations, health clubs and certain areas of water parks. These do not include pools and spas located at peoples privately owned homes. Portions or all of the larger water parks are inspected by the Ohio Department of Agriculture because they are considered amusement rides. 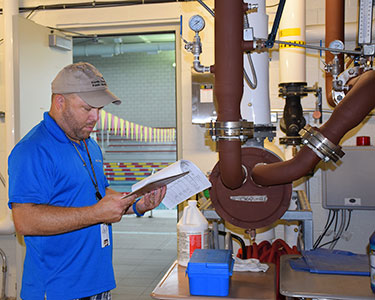 Franklin County Public Health is required by law to inspect our licensed pools and spas once per year, but many of our pools are inspected more frequently. When we conduct inspections, we measure water quality standards that include; disinfection levels, pH, alkalinity and other water quality standards. We ensure minimum safety requirements such as fencing and gates, safety and warning signs and life saving devices. We also inspect the pool/spa equipment, verify proper lifeguard training (if lifeguards are required), review record keeping and look at the overall condition of the facility.

It is very important that all swimmers and parents of small swimmers take steps to protect themselves and others from getting sick when at a pool. We want to stop germs from getting into the pool and causing what is called recreational water illnesses (RWI’s) or illness that is spread by swallowing or coming in contact with contaminated water used for swimming. The Centers for Disease Control has provided the following steps:

Ready to renew your license? Click here to pay online!

Included below are some of the basic requirements of for public pools and spas.  This is only a part of the many requirements and not a complete list.  View the complete Public Swimming Pool, Spa and Special Use Pool Rules (OAC 3701-31).

Who is required to have a pool or spa license?

Any person who operates or intends to operate a public pool or spa in the Franklin County General Health District shall apply to Franklin County Public Health prior to opening and annually once they have been licensed. See OAC 3701-31-02.

When am I required to close my pool/spa?

Ohio Administrative Code 3701-31-04 (B)(1) provides a list of critical operation items determining closure of a pool/spa. See page 2 of the linked PDF for the list.

What are recreational water illnesses (RWIs)?

RWIs can be a wide variety infections, including gastrointestinal, skin, ear, respiratory, eye, neurologic, and wound infections. The most commonly reported RWI is diarrhea. Diarrheal illnesses can be caused by germs such as Crypto (short for Cryptosporidium), Giardia, Shigella, norovirus and E. coli O157:H7. In the past two decades, there has been an increase in the number of RWI outbreaks associated with swimming.

What do I do if I find poop in the pool?

If you find poop in the pool, there are important steps that need to be taken to help prevent recreational water illnesses. Reacting quickly and appropriately is key to minimizing contamination and risk to swimmers. The Centers for Disease Control has excellent information on how to respond to a fecal accident in a pool. The Ohio Department of Health and Franklin County Public Health recommend this document be used to address fecal accidents in pools and spas.

Inspectors and the Areas They Serve